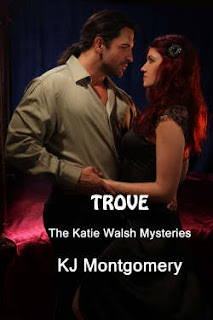 Please welcome KJ Montgomery to Dreamland. KJ has achieved her dream by publishing her novel, "Trove" (you get a sneak peek later on).

KJ, tell us a little bit about yourself.

I’m a right-brained soul trapped in a left-brained career. What I mean by that is my career deals with numbers and data. Imagine dealing with that five days a week (and some weekends) when my creative side is screaming to get out and take control…some days it’s tough to deal with the left-brain stuff.

I’ve lived in coastal New England all my life. I’m never far from the mountains nor the ocean, it’s the perfect location.

How and why did you start writing?

I’ve always had stories playing in my mind. A few years ago, I was presented with an opportunity with some job flexibility and I decided that now was the time to start “downloading” these stories.


Downloading -- that's a good (and very modern) way to put it. Now for some quick questions:
Who is your favorite author or with whom would you most like to be compared?

I’d have to say Jane Austen is my favorite. The fact that she dared do something that was out of societal norms and that her work is still around and admired today speaks volumes about her “voice.”

As for comparisons, I believe that every writer has a unique story to tell so to compare one with another is difficult to do. Having said that, I wouldn’t mind my “Katie Walsh Mysteries” someday, way down the road, being considered as a different flavor of Jim Butcher’s “The Dresden Files.”

What do you like to do when not writing, working, taking care of house and family? In other words, what feeds your soul?

I love spending time with my two nephews. I watch in amazement as their minds grow and their world expands. I also love to read (LOL who would think that?), gather with friends, and spend time watching the night sky in the mountains of New Hampshire.

What do you wear when writing?

It has to be comfortable. In the Summer it’s t-shirts and jeans and in the Winter it’s fleece. I have to confess, I have a fondness for lilac and pink. Both are very easy colors to find in my wardrobe and yet I have almost nothing in green.

If you play music while writing, what music genre works best for your muse?

Thanks, KJ, for allowing us to know you a little better. Before we get to the excerpt, where can we buy your book?

My book is available on line at Amazon Kindle, Amazon Print and on my website, www.kjmontgomery.com

Love your website and I can definitely tell you like lilacs and purples. The premise behind your book is intriguing--here's the blurb:

Katie Walsh is an investigative mythologist seeking clues that could lead her into the very distant past and uncover the secrets of the mythic Norland. Alec MacGowan is an archaeologist searching for clues in the recent past in an attempt to bring a murderer to justice.
Anonymous lovers five years before, they’re re-united as their worlds collide when they are thrown together to decipher the murdered man’s notes and identify his killer. As the quest unfolds, they are forced to deal with their simmering attraction and hidden secrets.
Can they uncover the secret hidden in the murdered man’s notes before the killer finds them? And can they open their hearts to each other before it’s too late?


Thanks for visiting, KJ! And now, an excerpt from the book...

Alec MacGowan, watched the woman and the interplay with the red-haired male, appreciating the genuine warmth he detected in their greeting. The affection between them suggested more than friends. Lovers perhaps? She was exactly as Robert had described her: petite, about five feet tall without the killer heels, chestnut hair, sparkling eyes that were noticeable even behind her glasses or maybe because of them. His appreciation of her grew as he noted that she had curves in all the right places, though Robert neglected to mention that. She had a woman’s figure, something to hold onto, sink his fingers into. He hated the way modern women tried to deny the luscious curves that nature endowed them with.

He noted that she was not a staid academic as most PhDs he’d dealt with seemed to be. She was not one to hide behind the academic uniform of dark man-tailored suits. She was wearing a red dress that accented her figure, hugging and folding against her body suggestively, while the other females were dressed in variations of their unspoken dress code. Most researchers were rather bookish or totally obnoxious and angry at the world, though he had to concede that the research profession was very cutthroat. Competent people were forced to fight each other to grab their piece of a finite amount of financing. But she… she seemed alive. Robert was right, though. She didn’t look like a pushover. She was definitely in charge of the huge man with her, or was it more that he was protective of her, indulging her, but protecting her?
He watched her as she headed toward the bar and him. As she neared, he started towards them and then froze. No, it can’t be her. It couldn’t be KitKat, the woman with whom he spent the night five years ago.

His anonymous lover had a name and her name was Dr. Katie Walsh. Damn, this makes everything more complicated.

He exhaled, steadied himself, and stepped in front of her, effectively and totally blocking her path as she neared the bar with the red-headed male in her wake.

“Excuse me, but aren’t you Dr. Katie Walsh of the Nordstrom Institute?”

She halted, forced to stop abruptly. She teetered in her high heels, grabbing the red-haired man’s arm to avoid ending up in a heap on the floor. She raised her head and scowled. He watched her closely as she scanned his face for recognition. He mused that it may have been difficult since her glasses had slid down from the bridge of her little nose and were now resting on the tip of it, clearly in danger of continuing their downward path.

“Yes, I am. I’m sorry, but do I know you? You look somewhat familiar, but I can’t seem to recall your name.”

“We have a mutual acquaintance, Robert Baines.”

“Really?” she said, tilting her head slightly, releasing her scowl at the mention of Robert. “How do you know Robert?”

“Actually, he’s my half-brother.” He added, “My older half-brother by three years. I’m Dr. Alec MacGowan, archaeologist.” He reached over, and with his forefinger, he gently pushed her glasses up to the bridge of her nose then nodded his head slightly. “At your service.”

****
Stepping back, Katie studied his face. What incredible grey eyes, she thought before she continued the perusal. Smoky grey eyes, almost black, silky straight hair touched with grey at the temples, high cheekbones, and a body that exuded masculinity… My God, she wanted to scream, it can’t be him. She swallowed, trying to maintain her control as visions of his long body draped over hers flashed before her. Concentrate, Katie, concentrate. He was dressed in a navy suit and a pale blue oxford shirt, his tie loose at the neck. He looked every bit the sexy “love ‘em and leave ‘em type,” straight out of a Hollywood film. Yet that’s exactly what she did five years ago. She’d picked him up, loved him and left him in the pre-dawn light after that wickedly delicious night. Oh my God, it is him, she moaned inwardly as she forced herself to listen to what he was saying while her heart raced and her breath tried to keep time.

She reached up and tucked her hair behind her right ear as she subconsciously licked her lips. “I can see a physical resemblance around the mouth and I think you have the same nose.”
But Robert didn’t have a brother, did he? He’d never mentioned it in the almost seven years they’d been friends. Surely he would’ve mentioned a brother, even if it was only a half-brother. “So, Dr. MacGowan, how is Bobby?”

“He’s fine. He asked me to remind you that he still owes you a dinner. Oh, and by the way, Dr. Walsh, you know as well as I do that no one, and I mean no one, calls him Bobby. If you want to call him and verify my identity be my guest. Actually…” He reached into his jacket and pulled out his cell phone, giving Katie a glimpse of the muscled chest straining against the confining material, the chest she had explored, caressed, kissed for one night of unbridled, decadent passion. Her fingers itched to wind themselves in the dark hair she knew was hidden under the shirt, to revel in its silkiness. “Allow me.”

The heat spread across her face like wildfire. Was it because he was calling her out for testing him, or was it because she was remembering how his body felt pressed intimately against hers? Hopefully, in the subdued lighting he wouldn’t notice. She reached for his cell phone, the call already connecting. “Hello, Robert?”

Her free hand rested on her hip. “Yes. I’m standing here with this guy, and he claims to be your brother. Dark hair, grey eyes, about six-three I’m guessing.”

“Excuse me, your half-brother. Who is he?”

“Mm, a digger,” she murmured. “So he’s safe to be around? You know how I feel about diggers. I mean, he’s not a modern day Jack the Ripper-type is he?” Why, oh why, did he have to be a digger?

Robert’s laugh was clearly audible as her eyes swept from Eric to Alec. Eric looked uncomfortable, shifting his weight from his left to his right foot. Alec wore a smug grin.

She wished she could believe him. She wanted to ask him why he neglected to tell her, his very close friend, that he had a brother. But this wasn’t the time or place. She sighed. “Thanks. I’ll see you when I get back to Boston.” She ended the call and thrust the phone at him, letting her other hand drop from her hip. “Seems like you’re legit.”

He winked. “Yep, got all my papers in order and I’m housebroken too."

Mystery, humor and romance--I'm looking forward to a series of Katie Walsh mysteries and I hope you are, too.

A Question of Loyalty 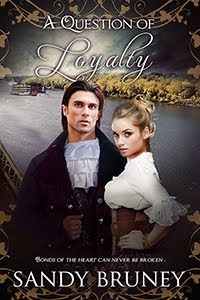 A Question of Loyalty

A Question of Boundaries 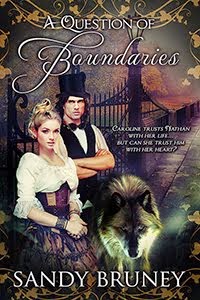 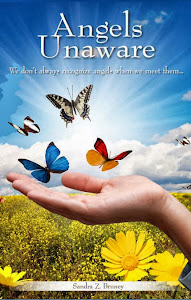 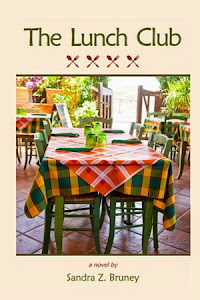 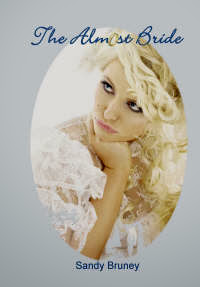 Sandy
I am a writer living in North Carolina. My stories are about women, their loves, their friendships, their trials -- and how they uplift and support each other. Please visit me at www.sandrazbruney.com.